VOCALOID has been around for more than a decade already and yet there are still people who don’t know exactly what it is and how it started out.


VOCALOID is a technology developed by Yamaha that enables users to synthesize singing voices having the lyrics and melody as input.

Songs are created by incorporating those lyrics into the melody and mixing in an instrumental track. Simply put, it’s a computer program which allows a user to make vocals for a song without an actual human singer. As of this post, the latest version of the software is VOCALOID4.

New songs made with VOCALOID are added to video sharing sites like NicoNicoDouga or NND for short and YouTube everyday. From there, it has inspired a huge amount of fan-made content ranging from music videos to remixes as well as covers by human singers and dancers.

This inforgraphic from NicoNico should best explain what I’m talking about: 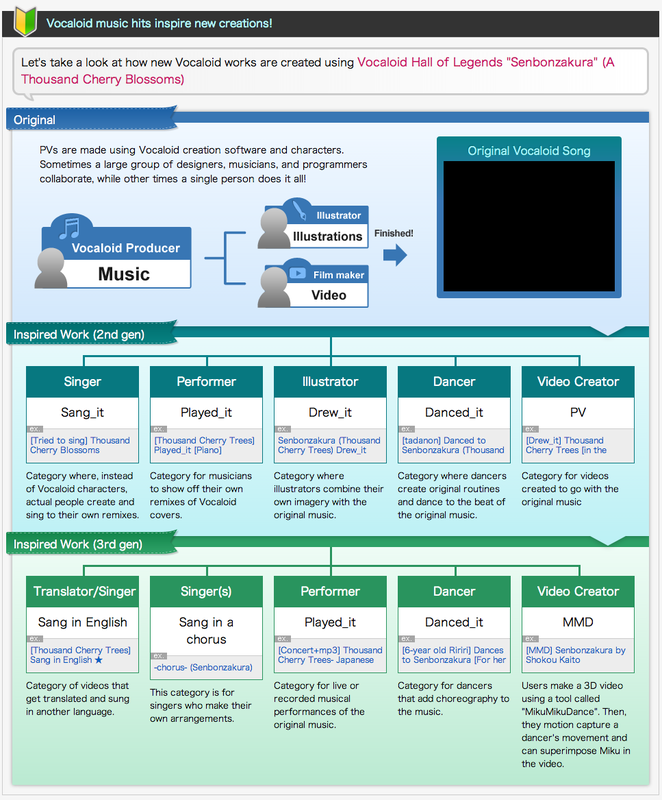 And if that wasn’t enough, here’s a video from Yamaha when they introduced VOCALOID3.


Is VOCALOID an anime?

As you can see above, the answer is obviously NO.

This question is often asked because each voicebank is usually represented by a character that usually fits its synthesized voice; often in a style similar to what we see in anime which is why it’s often mistaken to be as such. Basically the core of the VOCALOID fan community is the music produced with the said software.

Usually, these character designs may be given officially by Yamaha or by third-party companies who developed these voicebanks like Crypton Future Media and Internet Co Ltd which licensed the technology from Yamaha to create their own products.

From there, fans can create content that uses these character images like PVs (Promotional videos), dramas, doujinshis, short animations and many more.

On another note, It is a common misconception that VOCALOIDs are entirely Japanese – that is not true. Although the technology was first conceptualized by a Japanese man named Kenmochi Hideki, the first Vocaloid products were being developed both in Japanese by Crypton Future Media and in English by Zero-G. In fact, the first released voicebanks, namely Leon and Lola, were in English.

At those times though, VOCALOID wasn’t popular yet and was performing poorly in sales. Basically, it was being marketed as a music production program for musicians.

It is believed that the marketing trend of personifying VOCALOID began when Crypton Future Media, which was also struggling to get sales for their Japanese voicebanks namely KAITO and MEIKO, conceptualized the ‘Character Vocal’ series for their VOCALOID2 line-up that it started to get fame; most notably, Hatsune Miku, thus becoming very popular in Japan and eventually around the globe. This was because these characters that appear on the box appealed to more people.

Moreover, it served as an identity to a ‘virtual’ singer to which others companies soon followed Crypton’s marketing technique when it comes to releasing VOCALOID products. Today, aside from Japanese and English, there are now Vocaloids in several other languages including, but not limited to: Spanish , Korean, and Chinese with some even having two or more languages.

Where can I find some songs?

Obviously, NND and YouTube are a good place to start looking for Vocaloid content with NND being more organized with its tagging system and YouTube being more familiar to a western audience.

In the past, it was difficult to browse through NND because it was in Japanese. However, an English version of the site now available so it should at least be easier to browse though you might still depend on Google Translate since tags and video titles might still be in Japanese.

NND also has a dedicated section for VOCALOID. You can also find the Weekly Vocaloid Ranking (VocaRan for short) there.

You can also find some by joining in online communities like VocaloidOtaku, VocalSynth.Space, or r/Vocaloid

I’d love to have a copy of that song…

Most producers usually offer a download link. If not, there have been ways to extract the audio from NND or YouTube which I will not cover here. Admittedly, it is one of the most common methods however, you usually don’t get the highest quality.

It is encouraged though that if you really like the song and the producer who made it, please do support them by purchasing their albums especially the physical ones – Trust me, it’s cool to have something tangible and some even have extra stuff you might enjoy especially the limited edition ones and plus, you get the highest quality possible from an album.

Additionally, several producers, especially those connected with a record label,  would also make their music available on streaming services such as Spotify or Apple Music.

Many other singing voice synthesizers have also emerged but here’s one also gained a decent userbase alongside VOCALOID.

UTAU is a also a voice synthesizing software developed by Ameya. One notable distinction of UTAU aside from it is available for free (as shareware) is that users can make their own voicebanks collectively called UTAUloids that work with UTAU.

Basically, anyone can now have a synthesized voice with UTAU and the concept of sharing works online like in VOCALOID still applies here although with a few additional ones like collaborations when it comes to UTAUloid characterization and cross-promotions.

There are a lot of things to talk about UTAU but I’ll reserve that for another time.

randsss is the chief writer of VocaCenter.net. He became a fan of VOCALOID in late 2011. After a hiatus from the community, he is slowly getting back on the scene. He is currently learning how to use UTAU.

#UHPCB2018 – UTAU community event to come together in chorus battle

This site uses Akismet to reduce spam. Learn how your comment data is processed.

NOTICE: VocaCenter.net is no longer active but will stay up. For the latest vocal synth news, check out VocaSphere